Yes, a mock draft in August. I know that we’re two weeks away from the NFL season kicking off, but it’s never too early to think ahead to the 2018 NFL Draft.

With that being said, the Minnesota Vikings roster, from top-to-bottom, is arguably one of the best in the league. There are some holes and lack of depth at certain spots though.

Offensive line, outside linebacker, cornerback and safety seem to be the four biggest current weaknesses for the team.

Of course, this can change at any moment as injuries and many other things happen, but let’s think about the present for now.

One of the premier positions in all of football is left tackle. It is a position that teams look to solidify for multiple years. With Riley Reiff and Mike Remmers essentially being on two-year deals, there seem to be a serious lack of depth behind those two.

Rashod Hill is a good developmental option as a swing tackle at both left and right tackle, but I still think he’s a year away from being a serious contributor in the offensive line room.

In my opinion, better suited as a right tackle, McGlinchey has the potential to be a day-one starter on the right side of the Vikings offensive front. He also provides you with flexibility and security in case Reiff/Remmers do not pan out down the road.

McGlinchey’s technique is textbook. Getting depth and setting vertically, his pass sets are extremely fluid. There is no wasted movement. He looks as if he was naturally born to be an offensive tackle.

In the example above, it gives you a clear picture of McGlinchey’s (left tackle, No. 68) pass set and just how fluid he looks. The defender attempts to bull-rush him after initially rushing hard up-field.

McGlinchey easily adjusts and beats the rusher to the punch. He does not let the defender into his chest — extending his arms. His ability to anchor down and force the rusher to “run the hoop” around the quarterback is picture perfect.

Although not extremely light on his feet, McGlinchey has average footwork. In the run game, he understands the proper angles and steps he has to take in order to successfully block his defender.

He always keeps his feet alive and never gets them stuck in the ground.

An offensive lineman should always keep his feet moving no matter what. Getting as much push as possible and clearing lanes for runners.

McGlinchey consistently does this.

An area of an offensive lineman’s game that evaluators love to see is their ability to finish. Do they stop when the whistle is blown or are they attempting to put every defender they encounter on their back?

Feeding off of each other, McGlinchey has the mentality that he wants to embarrass every defensive lineman or linebacker that he’s assigned to.

Despite being very tall for an offensive tackle, McGlinchey has  good ball get-off — meaning that he has a good feel for when to exactly begin his pass sets or run blocking assignment in order to defeat defenders.

He possesses extremely long arms, so it is hard for rushers to actually get hands on him.

Having an impressive physique at offensive tackle sometimes comes with deficiencies though.

McGlinchey is a bit of a lunger.

“Waist bender” is the most common term heard by fans. Being a waist bender means that he has a bad tendency to bend at the waist and duck his head when making blocks.

Doing this blinds you from the actual defender and that you are in no control of your body movements.

This is one of the biggest reasons why I think McGlinchey is best suited as a right tackle as opposed to being a left tackle on the next level.

As it is every year, the Crimson Tide secondary is loaded. They seem to always have a defensive back that goes very high in the draft. It looks as if it will be the same old story again for the back end of Nick Saban’s defense.

The headliner name is strong safety Minkah Fitzpatrick, who looks the part of an early first-round pick, but his teammate beside him manning the other safety spot is impressive as well.

Ronnie Harrison has quietly flown under the radar to this point. Typical for a team that is always loaded annually like Alabama.

Everyone knows that Andrew Sendejo is far from a fan favorite, but he is a huge favorite of Mike Zimmer. He’s rarely ever going to make splash plays, but Zimmer knows that he’s always going to be where he’s supposed to be.

On the other hand, it does not cost any money to let Sendejo go following the 2018 season, and the safety spot opposite of Harrison Smith seems to be a game of musical chairs along with Jayron Kearse and Anthony Harris.

Harrison potentially gives the team a solid long-term option and the running-mate with Smith that the team has so desperately been looking for.

Being that he is on one of the best defenses in the country, Harrison’s natural ability can sometimes go unnoticed. He has a great feel for what offenses are trying to execute and he does a very good job of noticing concepts before they actually happen.

One of Harrison’s most impressive traits is his ability to consistently show up in run support. He understands his gaps and fits on certain plays and has the ability to stop ball carriers in their tracks.

He also has the sideline-to-sideline range to prevent long runs.

Harrison can be a bit inconsistent in pass coverage. He’s shown the ability to be comfortable as a single high safety on the roof of a defense and be able to come down and guard receivers/tight ends in the slot.

Although up-and-down in coverage, his hips and fluidity need to improve some in order to be able to gain the trust of NFL evaluators.

The NFL has quickly turned into a passing league. It is widely known that slot cornerback has become one of the most sought after defensive positions in the NFL.

With teams moving to more 10 and 11 personnel looks offensively, it has boosted the value of having a dependable slot corner. Duke Dawson was without question one of the best nickel corners in the country in 2016.

Hips are an important component when evaluating cornerbacks. The one’s who possess them usually are smooth in coverage. Having fluid hips helps them transition in-and-out of breaks and transition while guarding receivers.

Dawson has shown the ability to be like a  “gnat” — meaning that he just seems to be all over whoever he’s around. Forcing and incompletion on 31 percent of targets into his coverage (Pro Football Focus), which was the best among draft-eligible cornerbacks last season.

Finding cornerbacks who are willing tacklers is very hard. With Dawson that is not a worry, as he is one of the most sure tackling defenders in the country.

Converting 76.1 percent of his attempted tackles will definitely help Dawson’s case in improving his draft stock. He has a chance of becoming one of the better nickel corners in the draft.

Having only accumulated 868 snaps in his three-year career, Dawson is a bit inexperienced. It seems like a high number, but it really is not considering that he has only played in 11 games prior to 2016.

All of his snaps last season were at nickel corner as well. With him most likely assuming a role as an outside corner and spot playing duty in the slot, next season potentially is an opportunity for him to show that he is a standout player.

A debatable decision, but a needed one, the Vikings have a potential dilemma at the top at quarterback. With Sam Bradford, Teddy Bridgewater, and Case Keenum all scheduled to be unrestricted free agents in 2018, the teams future at the position is very thin.

Taylor Heinicke isn’t progressing as much the team would have liked after suffering from ankle surgery that resulted in missing the entire 2016 season. It may be time for the franchise to find a developmental option.

One of the biggest adjustments quarterbacks must make from college to the NFL is the ability to throw into tighter windows and that is the result of having proper anticipation skills. Allen has that.

Due to having below average arm strength, he has to defeat defenses by seeing things before they happen as he just doesn’t have the arm strength to make split second decisions.

Allen has the unique ability of being able to see throwing lanes and dissect defenses by using anticipation when throwing to targets.

It’s no secret that Allen’s arm talent is very limited. Best served in an Erhardt-Perkins or West Coast style of offense where he can get the ball out his hand quickly and take advantage of the short-intermediate areas of the field.

Similar to the example above, what you see some times with Allen is that he just misses easy throws. He must clean up that aspect of his game up if he wants to improve his draft stock.

Allen will undoubtedly be a prospect that teams see as a late day-two or day three option or potentially a combo pick. Meaning that if you draft a QB early, they may double up on the position by picking Allen later on. Similar to a Robert Griffin III and Kirk Cousins situation.

Flown a bit under the radar, Teller has put together a stellar career as a Hokie. A pre-season First-Team All-ACC recipient, he hasn’t received the same notoriety as Ohio State’s Billy Price or Notre Dame’s Quenton Nelson, but he has many likable traits.

An interesting story, as he started out as a defensive end in his freshman season in Blacksburg. After redshirting, he made the transition to guard and hasn’t looked back since.

Versatility in both pass and run blocking, Teller’s stock has a chance to soar, but for now he still remains under the radar and the Vikings take advantage of that here.

He has a pit bull mentality in the run game, as he looks to finish defenders whenever he engages with them.

According to Pro Football Focus, Teller finished with an 88.6 run blocking grade, and a run block success percentage of 93.2% — fourth best in the country.

As a pass protector he took tremendous strides in 2016 after a sub-par 2015 outing. He surrendered only one sack and six QB hurries. 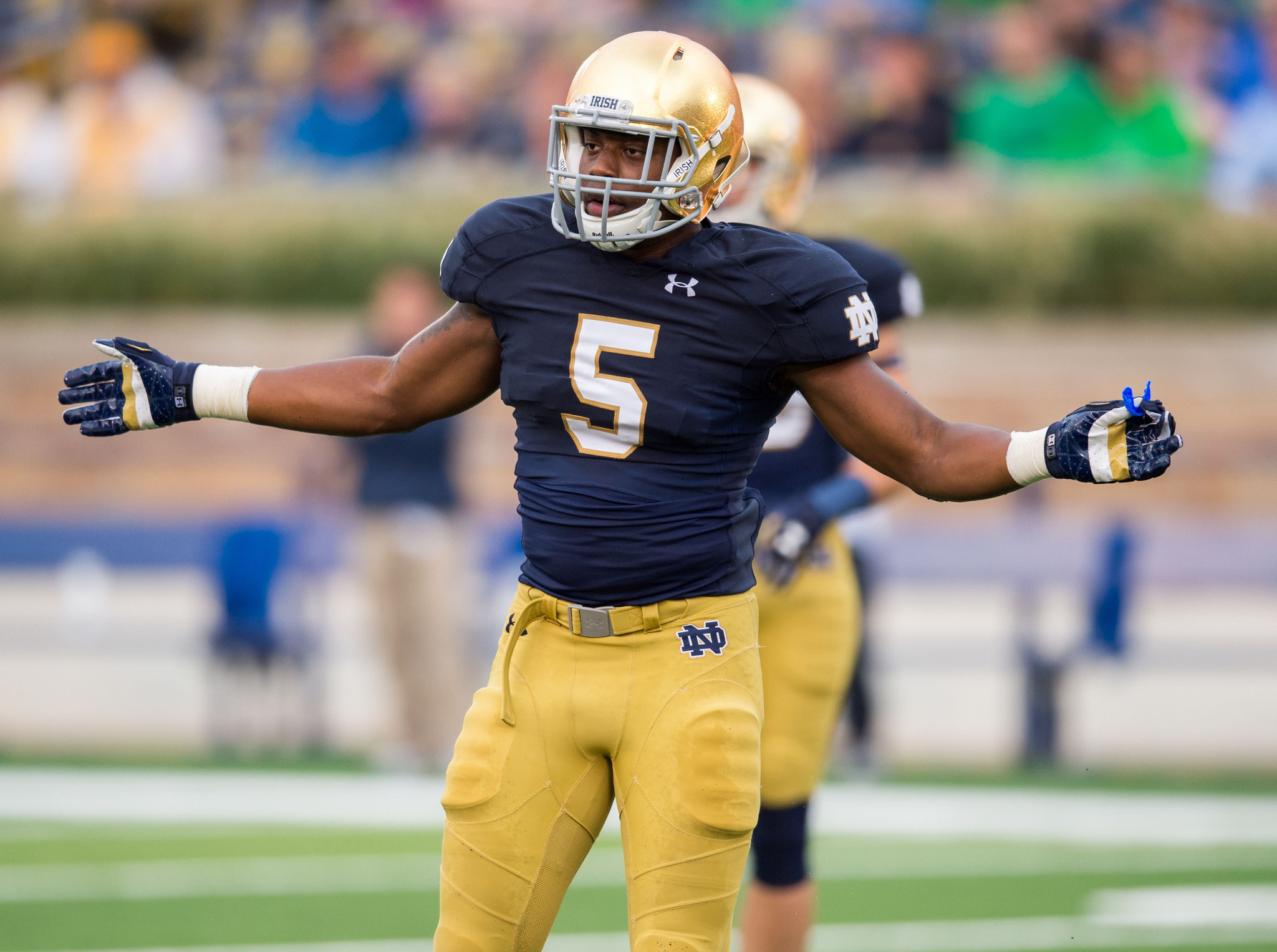 A former five-star recruit and the unquestioned leader of head coach Brian Kelly’s defensive attack, Morgan has the chance to build off of an impressive junior season.

Collecting a career-high and team leading 94 tackles, what makes Morgan standout? He’s not the most athletically gifted player on the field, but he continued to make plays at both inside and outside linebacker spots.

Combine that with playing on multiple special teams units, he has a chance to be an asset in many different phases of the game for an NFL team.