How Xavier Rhodes Became a Star

How Xavier Rhodes Became a Star 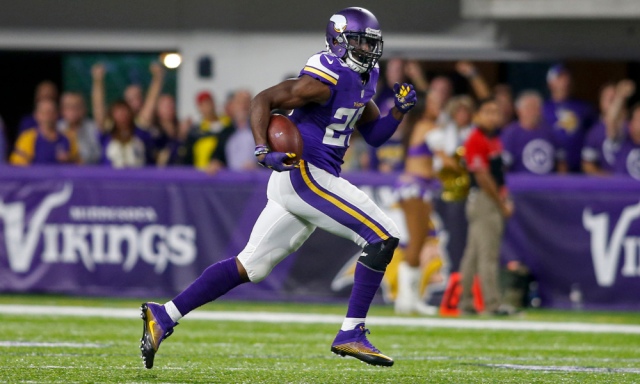 Selecting receiver Troy Williamson and defensive end Erasmus James, it was one of the worst draft classes in franchise history. With another chance to redeem themselves, the future looked bright. Possessing picks No. 23 and 25 to begin the night, general manager Rick Spielman was guaranteed to get two high end talents in the latter half of the first-round.

Sharrif Floyd headlined the class due to a historical draft slide. Seen as a top-five talent pre-draft, Floyd fell to the Vikings at No. 23. The pick that drew the most controversy was their final selection of the night, receiver Cordarrelle Patterson. Trading four picks with the New England Patriots in order to move back into the first-round, Spielman made a gamble on a prospect that was labeled as an ultimate “boom or bust” type of pick due to his raw ability as a receiver.

Fast forward to 2017, Floyd’s career is in question due to an unsuccessful knee operation and Patterson has now moved on to the Oakland Raiders. The clear highlight of that night remains the pick they made in between the two. With the 25th overall selection, the Vikings selected cornerback Xavier Rhodes.

The team had a clear hole at the position. Chris Cook was on his last leg, as he hadn’t shown any improvement since being selected in the second round of the 2010 draft, and Josh Robinson was going back and forth between being an outside and nickel cornerback, which ultimately ruined his overall development.

Rhodes was expected to come in and be an immediate contributor to a secondary that had been starving for a standout performer since the days of Antoine Winfield.

Earning the nickname “Rhodes Closed”, he has now become that foundation piece of the teams defense that they were hoping for when drafting him. Initially though, it got off to a rocky start. Lets take a look at the development of what has become one of the best cornerbacks in the league.

The biggest knock on Rhodes entering the league was his grabby mentality. Meaning that when he is back pedaling and the receiver he’s guarding eats up the cushion that he’s giving them, once the receiver re-directs or changes directions, it was his natural instinct to grab the receiver.

In the example above, Rhodes is playing off man-to-man coverage. He is much more comfortable when he can get his hands on the receiver at the line of scrimmage. The reasoning behind why he feels more comfort is that Rhodes feels as if he can control where the receiver is going if he can initially get his hands on him as soon as the ball is snapped, opposed to reacting to him.

Defensive backs are allowed what’s called a “five-yard grace period” where they can have their hands on receivers, but once the receiver clears those five yards, the defensive back is not supposed to touch him.
The most common man-to-man technique taught by Vikings defensive backs coach Jerry Gray is what’s called a “jack technique”. The jack technique tells the corner back to position their body to stay directly down the mid-line (chest) of the receiver. Many receivers are taught to pick a side during their initial release in order to gain natural leverage depending on the called route pattern(s), but the jack technique prevents this.
As Rhodes has gotten older and matured with the technique, you can tell he has become more confident with it. His patience is much better as he now allows receivers to choose their own path, while he still stares down the mid-line of their chest, reads and reacts to their route.
Due to his maturation, patience, growth and trust within the system, his habit of being extremely grabby has decreased a lot.

The biggest area where Rhodes’ game has evolved is his ball skills. Prior to 2016, he had a total of two interceptions. Recording a career high in interceptions (five), but a career low in pass deflections (10) makes sense because he was catching the ball at a high frequency all while being targeted at a significantly lower amount than previous seasons.
Since his Week 17 (2015) interception against the Green Bay Packers to clinch the NFC North division title, Rhodes has been on an interception tear. It is one of the biggest mysteries that I have ever seen.

Rarely do you see a cornerbacks catching ability improve significantly, but with multiple repetitions, it has worked for Rhodes. In the off-season, he frequently works out with Pittsburgh Steelers receiver Antonio Brown in Miami to improve his hand-eye coordination and catching. The workouts with the All-Pro have paid off.
After somewhat of a slow start to his career, Xavier Rhodes is now trending upward and quickly on his way to stardom. Arguably the best cornerback in the NFL during the 2016 season, he must now prove that he can consistently be that shutdown corner from year-to-year.
He’s assumed to become one of the highest paid at his position as early as this summer. “Rhodes Closed” has become one of the most notable nicknames throughout the NFL, as well as his overall performance.